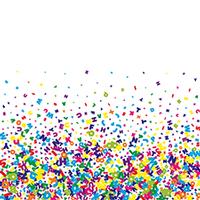 Why is the Ultimate Visual Aid Spelled with 26 Letters?

Many people believe for ultimate success an audio-visual presentation should fill the screen with a maximum of pictures and a minimum of text because: "Pictures are visual; text is not." Objectively, it can be demonstrated that this simply isn't true. On the contrary, when properly used, text can often be more visual than virtually any picture (image) you could imagine.

I once had a heated discussion with a well-known communication coach on the proper way to do an audiovisual presentation. I agreed with virtually everything he said. However, at one point he made the statement: "The Holy Grail of every audiovisual (AV) presentation should be no words whatsoever appearing on the screen. Pictures (images), i.e., photos, drawings, diagrams, cartoons, etc., are visual. Text is not."

I am aware this seems to be the general opinion among communication coaches, but I had never heard it expressed so categorically. Which made me wonder, "Is this really true? Are text and pictures (images) necessarily antithetical?"

When I really looked into the matter, I began to question the axiomatic assertion that text and pictures are fundamentally different things. After due consideration, I came to the conclusion they are not. It is now my position that text is visual—and in some respects even more visual than images.

Try this experiment. Open a newspaper or magazine to any page with a photo. Try looking only at the upper left-hand corner of the photo and nowhere else. It is virtually impossible. The moment the eye is confronted with an image (photo, drawing, diagram, etc.), there is a natural tendency to wander all over it.

Many speakers commit the error of using images when they really aren't needed. Imagine a speaker telling the audience to look only at the center of a photograph or complex diagram because that is the only part they wish to talk about. But while they are talking about the center, much of the time the audience will be looking somewhere else, because they can't help it. This constant movement around the image results in split attention, diminishing the impact of the speaker's comments.

When you put something on the screen in an AV presentation, your initial objective is to draw people's attention to what you are showing. However, your second—and most important—objective is for the material on the screen to advance or reinforce the point you are trying to make. The problem is the image you are showing will probably contain more information than you wish to talk about. So while you are talking about one aspect of what is on the screen, to some degree the audience's attention will be attracted to and engaged by other things on the screen you don't wish to talk about. This distraction is usually worse with photos, but is also true with flow charts, diagrams, cartoons, etc.

There are techniques to minimize this distraction, but they take time and brainpower to develop. Unfortunately, AV presentations I have seen suggest that the presenter is either unaware of the problem—or more likely is unwilling to expend the time and brainpower necessary to eliminate it.

Now what about my apparently outrageous claim that text is visual, and perhaps even more so than images?

When I presented my thesis to this AV coach, he became incensed, as if I had trespassed on some unshakable, almost religious precept. He tried to debunk my heresy with a quasi-scientific test.

"When you look at a newspaper, what do you look at first, the text or the pictures? The pictures. Only afterward do you read the text. In other words, first you focus on what is visual, then and only then on the text. Q.E.D."

I countered by asking, "In an AV presentation, when you see a picture appear on the screen, there is no question that you focus on it. But as we now agree, you do not focus on all of it, but rather you immediately let your eyes wander to different parts of it while the speaker is trying to hold your attention to only one part of ii. By contrast, when only text appears on the screen, this is where you focus your total attention, because there is nothing else to look at. Q.E.D"

His sole response was to repeat the questionable mantra, "Pictures are visual; text isn't. Any fool knows that." This is where our exchange ended because there seemed to be no way of going any further.

I have presented this same thesis to a number of other AV coaches, and initially always got the same response, but less dogmatically. And usually broken down into two specific objections.

Let's examine these objectives one at a time.

Therefore, trying to eliminate all text from an AV presentation is both unnecessary and can often be counterproductive.

For example, in longer presentations, text (frequently in the form of crisp, clear bullet points) is often very useful to remind the audience of what has already been covered and to suggest what still lies ahead. This is something I have often done, and usually with great success.

At one time I was called upon to produce a slide presentation to introduce specialist doctors to an important new concept in their field. Because it would seem rather complicated at first exposure, a decision was taken to use cartoons to simplify the concept as much as possible. Once the doctors had been exposed to the basic idea, they would be offered detailed written material and symposia to explore the matter further.

Well, yes and no. The cartoons clearly laid out the new concept in a clear, concise fashion, but there was a fatal flaw. As the doctors left the meeting rooms, they were discussing the presentation. However, all the comments I heard were about how cute, clever, and entertaining the cartoons were, but nothing about the new medical concept itself. In short, the images were so good, they got in the way of the message. We had to rethink our strategy and come up with another approach.

On another occasion, I was engaged to give an AV presentation on the essence of good writing to a group of professional translators and editors. It lasted 90 minutes. When it finished, a lady came up to me and said: "I really enjoyed your presentation. It was so interesting and informative. Last month, we had an AV presentation that was tedious and boring. I think the presenter must have used at least 50 slides. How many slides did you use in your presentation?"

She nearly fell to the floor in a faint. She simply couldn't believe what I was telling her. I had used twice the number of slides as the presenter she had found tedious and boring—and most of them were text slides.

So, what made the difference? I simply integrated the text slides with the visuals à la Steve Jobs. I say "simply," but conceiving and building such a fluently integrated AV presentation is far from simple. It takes a lot of thinking and meticulous execution. And yes, it does take more time than producing an AV presentation like the one the lady said had failed so miserably. However, not enormously more time—and the result is well worth the extra effort.

The holy grail of any AV presentation—in fact, of all forms of communication—is to say what you want to say as clearly, concisely, and engagingly as possible. Anything that advances these fundamental objectives is good; anything that detracts from them is not good. Q.E.D.

For further discussion of text on screen: "Why Visual Aids Need to Be Less Visual."