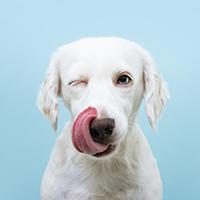 How to Avoid Using Too Much of a Good Thing

Here is a speech I gave some years ago. It used only one visual aid, and it used it only twice. I think the speech would have been effective without this single visual aid, but just imagine how much more effective it was with it.

Have you ever wanted something so much that your teeth hurt in anticipation? I did. As a child I desperately wanted a dog. I love all animals, but I have special affection for dogs. For various reasons, it was not possible for my parents to let me have one although they knew how much I wanted one. Fortunately, there were several dogs in our neighborhood that I could regularly see, pet, play with, and let lick my face. Some people don't like that, but I love it. For me, a dog that doesn't lick is somehow not a real dog. One day when I was about 11 or 12, my parents announced that some friends of the family had to go away for a few months and would leave their dog with us. Well, of course, I was overjoyed. I didn't know what kind of dog it was, because I had never seen him. But it was a dog, and it was going to live with us until they got back. When it arrived, he turned out to be a Boston terrier. I think it was the first time I had ever seen one, and I immediately fell in love with him. (Here, I showed the audience a big picture of a Boston terrier and said), "Now admit it. You simply can't help but fall in love with him." (I then brought the picture up to my face as if he were licking me.)

The dog's name was Reginald. Of course, that was his official name, but everyone called him Reggie. We had a small yard where he could run around, but for me that really wasn't enough. My brother, sister, and I took turns taking Reggie out for walks. There was little automobile traffic in our neighborhood, so the other dogs roamed free. But since Reggie wasn't really ours, my parents insisted that we put him on a leash. My brother and sister dutifully obeyed, but to me this just didn't seem right.

I seldom disobeyed my parents, but this time it seemed justified. So, during the first couple of weeks, I gave Reggie intensive obedience lessons. In particular, every time we needed to cross a street, I first made him sit down and wait a minute. At first, he didn't want to wait, so he would pull on the leash and step into the street. Each time he did, I gently but firmly spanked him on the behind and pulled him back onto the sidewalk. He would look at me rather hurt, but after about a week or so, when we needed to cross a street, he would automatically sit down and wait.

Then came the big day. We were about to cross the street, so Reggie immediately sat down. I took off his leash and said, "Sit!" He stood up and put a paw into the street. I immediately grabbed him, gently spanked him, and made him sit down again.

After two or three days, he understood. When we arrived at a crossing point, he would immediately sit down, and I would take off the leash. He didn't move. I said, "Stay" and then I started across the street. He looked very anxious and got up as if to follow me. "Stay!" I said. He sat down again. When I got to the other side, I once again said, "Stay!" He continued sitting there, but clearly fighting with himself not to get up and follow. I checked both ways to be certain no cars were coming. Finally, I said, "Reggie, come on. Come on." He bounded across the street, jumped up into my arms, and began frenetically licking my face. I couldn't have been happier.

From then on, each time it was my turn to take him out for a walk, I would wait until we were far enough away from the house so no one could see and then let him off the leash. As we went down the street, Reggie would happily zigzag back and forth across the neighbors' lawns, sniffing the flowers, and rolling around on his back.

This went on for several weeks with no problem. Then one day while we were walking, Reggie saw a cat. The cat started running away and Reggie tore after him. I called out, "Reggie, stop. Stop." But he didn't. He continued chasing the cat to the end of the street.

The cat ran across to the other side with Reggie in hot pursuit. However, just before he got to the end, he suddenly realized where he was and put on the brakes. It was almost like you see in animated cartoons. As hard as he might, he just couldn't stop in time. One paw went into the street, which he quickly withdrew back onto the sidewalk. When I caught up with him, I looked at him sternly and said, "Bad dog! Bad dog!" I lightly but firmly spanked him. He looked crushed. I then picked him up and he began frantically licking my face.

Although I knew it was going to happen, I had managed not to think about it. However, about three months later the family friends returned and came to take Reggie back. When my mother opened the door, Reggie instantaneously went bounding up to them, running around in circles at their feet until the man picked him up. Reggie immediately began licking his face as energetically as he had ever licked mine. As they carried him away, tears welled up in my eyes. I didn't cry, but it was quite a battle not to. I never saw Reggie again.

I have had one other dog in my life, which I also dearly loved. But . . . well, a first love will always be a first love. Nothing can really replace it.

I live in Brussels, Belgium. Boston terriers are rare here. Every time I see one, I turn and stare. I can't help it. I sometimes even follow him for five or ten minutes. I try to be very discreet, so the owner won't think I'm a stalker. But I just can't help it.

I console myself once a year by buying a calendar picturing Boston terrier. But it's not enough. Although I know it is impossible, I continue looking to recapture my true first love. My dog. My Reggie.

At this point, I went silent, brought the picture of the Boston terrier to my face, and began moving it back and forth as if he were licking me. This went on for several seconds. Then I sat down. The comments about my speech were more than favorable. I couldn't have been happier.