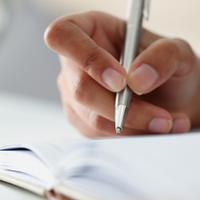 The surprising benefits of a pre-first draft

Ever since I joined Toastmasters International several years ago, people have been telling me that I am a "natural-born speaker."

If you don't already know, Toastmasters is a worldwide non-profit club (358,000 members) of people helping each other improve their presentation skills. I strongly recommend it.

A feature of each meeting of my particular club is what is known as "Table Topics". Without any warning or preparation, members are selected at random to speak for two minutes on a totally unexpected subject. These can be anything from the sublime (Is democracy only a blip in history, condemned to disappear?) to the ridiculous (If you could be reincarnated as an inanimate object, what would it be?).

This is apparently where I shine. After each Table Topics session (usually 6–8 subjects), the members vote for the best speaker. More often than not, it is me. Thus, the belief that I am a "natural-born speaker."

I very much appreciate the accolade, largely because it is false. Until I reached my early 20s, I could hardly put together two words without tripping over one of them even on subjects I knew very well, let alone subjects I knew nothing about.

All this changed virtually overnight. The odd thing is this life-altering experience had nothing to do with speaking.

When I was a mathematics student at UCLA in the 1960s, as an extracurricular activity I joined the Daily Bruin, UCLA's daily student newspaper. I rapidly moved up through the ranks (largely because the ranks were so thin).

One day, the editor-in-chief asked me if I would like to become editorial editor. Among other things, this meant I would be responsible for the newspaper's daily editorial opinions, most of which I would have to write myself. I was transfixed by the proposal. Perhaps because of my science proclivities (there is always more than two sides to anything), unlike my contemporaries I had few strong opinions about anything. So how was I going to produce an editorial commentary every day of every week?

I timorously accepted the assignment. Fortunately, I had a couple of weeks before taking up the post. I spent much of the time closely looking at breaking news on the campus. With a population of 21,000, UCLA was like a small city, so something was always happening. I also looked at things taking place across the country and around the world that might have an impact on our student readers. To my surprise, by forcing myself to look for them, I found I had more things to say than I had imagined. And apparently, I did it quite well, because the following year I was elected editor-in-chief.

My basic technique was to pick a topic that appeared to be of some relevance to my readers, then start writing about it almost without thinking. Each sentence I wrote seemed to give rise to another one, then another one, and then another one. In most cases the sentences were filled with questions marks, because the more I wrote the more I realized how much I still needed to learn in order to say something interesting and cogent. So I regularly went to the library (this was before the internet) and did the necessary research.

At the time I had no name for this technique; I didn't even realize that it was a technique. Today, it is what I like to call a "pre-first draft."

As a professional writer and writing teacher for more than 40 years, I constantly tell my students that writing anything worth reading requires a minimum of two drafts (often more), each with a distinctly different purpose.

I still insist on these two basic steps. However, in order to decide what you really want to say, doing a pre-first draft (PFD) is often the best method.

Pay particular attention to the research aspect of the PFD. Each time you trawl through the internet (do people still do research in libraries?), you are likely to discover something you hadn't expected, or even thought about. Whenever this happens, it will almost certainly color how you present your point of view. On rare occasions (probably too rare), it may even cause you to change your point of view.

To me, this is perhaps the greatest benefit of doing a PDF. Whether we realize it or not, whenever we start to write about anything we almost always have some point of view, often based on very little. Discovering this point of view and then challenging it by doing research that could change it can be extremely rewarding. In order to convince other people about something, we first need to convince ourselves.

Isn't this what intelligent writing and public speaking should be all about?

"I never know what I think about something until I read what I've written on it."—William Faulkner

"The act of writing is the act of discovering what you believe."—David Hare

"I know very dimly when I start what's going to happen. I just have a very general idea, and then the thing develops as I write."—Aldous Huxley

"There are thousands of thoughts lying within a man that he does not know till he takes up the pen and writes."—William Makepeace Thackeray

"Writing became such a process of discovery that I couldn't wait to get to work in the morning. I wanted to know what I was going to say."—Sharon O'Brien

For more, see Communication Corner No. 37 "Notes on Writing by Writers of Note"