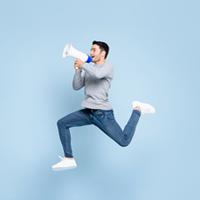 Say it well, say it often

Two people can give a speech on exactly the same subject, using almost exactly the same information, yet one speech will be a brilliant success and the other a dismal failure. How does this happen? Many factors contribute to success or failure, but only one factor virtually guarantees that your speech will stand out like a shining light or be clothed in darkness like a burned-out bulb.

They start off by saying: "Tonight I would like to talk about X. I intend to make four key points," which they then name. In the body of the speech, they elaborate on their four points. Finally, at the end, they conclude by saying, "So in resume, the four points I have made are…."

Speaking is ephemeral. When you say something, first it is there, and then it is gone. So simply saying it is not enough, and simply repeating it is not enough. You must say it and repeat it in such a way that the listeners are likely to take it to heart and remember it long after you sit down. The ability to say something and repeat it in an original, memorable way is what distinguishes a good speaker from a mediocre or poor one.

Believing that an example is better than an exhortation, I would like to show you a short speech I once delivered to an international audience on the benefits of voluntary service. I don't pretend that this was a great speech, but the reaction it produced indicated that it was fit for purpose.

As you read the speech, imagine you are listening to it. You have no opportunity to stop and re-read a passage to truly impress it on your mind. It is there, and then it is gone.

The numbers in parentheses throughout the speech refer to comments about it at the end. For best results, read the speech straight through (listening to it with your mind's ear), then read the comments, and return to the cited passages to see if you agree.

"Measure for Measure: Getting Back More than You Give"

(Tell them what you are going to tell them)

It is often said that an excellent reason for becoming a volunteer is that you frequently get back more than you give. For me, this turned out to be true on two crucial occasions. (1)

In the 1960s I was a mathematics student at UCLA (the University of California at Los Angeles). At that time it was expected, but not required, that you participate in so-called "extracurricular activities" in order to broaden your general culture. I volunteered to work on the student newspaper.

For your general culture (2), you should know that at many American universities, the student newspaper is published daily (show the newspaper) (3). The UCLA Daily Bruin published 16–20 pages every day: Monday, Tuesday, Wednesday, Thursday, and Friday of every week. I seemed to have had somewhat of a talent for journalism because in my last year at UCLA, I was elected editor-in-chief.

Working on the newspaper and then running it was a telling experience for me because it opened my mind and stimulated interests far beyond the world of science and mathematics. It was like having my brain rewired. (4)

In September 1965 I went to Tanzania in East Africa as a volunteer teacher. My first posting was to an isolated village in the middle of the central plains. I virtually lived in a mud hut, suffered through a drought, saw leprosy, and contracted both malaria and dysentery. All of these things affected me, but they were pretty much expected. What really struck me were the things that were unexpected. (5)

I was teaching in a boarding school, housing approximately 300 students. About twice a week, a notice would appear on the school bulletin board expressing condolence to a student for the loss of a close relative. As an inexperienced Californian, I assumed that this would be the death of a father or mother. Then I realized that more than half the time, it was for a brother or sister. In Europe and North America, the loss of a teenage brother or sister would have been an extraordinary event; in Tanzania, it was simply a fact of life. It took me a while to comprehend and come to terms with this, but eventually, I did.

However, what really rewired my brain (6) was the political and social structure of the country.

Before being sent to Tanzania, we volunteers underwent nine weeks of training. We were told that Tanzania was a one-party, socialist state. For many of us, this automatically meant a communist-style dictatorship. We were also told that when Tanzania became independent from Britain in 1961, TANU, the independence party, was so popular that in the first elections any TANU candidate automatically won against all opposition. TANU could have put up a giraffe as a candidate and it would have won by a landslide. (7)

To inject some democracy into the political process, we were told that President Julius Nyerere decided to abolish all other political parties by folding them into TANU. This way, several candidates could contest for seats in parliament. Since they would all be TANU, the voters would have a real choice rather than automatically electing the candidate sporting the magic TANU label.

Again, this sounded like double-speak for a dictatorship; however, when I got there, I discovered all this was actually true. The Western idea of multiparty democracy at that time in Tanzania made no sense. Shortly after I arrived, there was a parliamentary election. Nearly half of the incumbent members of parliament were turned out of office. Under the previous multiparty system, their seats would have been untouchable.

(Tell them what you told them)

These and other experiences as a volunteer on the UCLA student newspaper and then a teacher in Tanzania broadened my worldview way beyond anything I could have imagined. (8) I expect that volunteering in most other circumstances would have the same result. Volunteering offers you the opportunity to experience aspects of the world you might otherwise never touch, or even know existed.

I don't know if all volunteers get back more than they give. But I know that I did. I am almost embarrassed by how much I got from these experiences compared to how much I gave. (9)

The younger you are, the more important it is for you to consider volunteer work, either in your home city, your home country, or elsewhere. What you will gain could be of inestimable importance in guiding you through the rest of your life. (10)

(1) A pithy way of saying "I believe this is true and I intend to demonstrate it."

(3) Visual aids always add to the impact of a speech.

(4) A picturesque way of describing the effect; "rewired my brain."

(6) Repetition of a picturesque way of describing the effect: "rewired my brain."

(7) Dramatic exaggeration to make a point: "a giraffe as a candidate."

(9) Return to the theme of getting back more than you give.

By way of conclusion, (10) is a clear call to action. When the purpose of a speech is to get people to do something, powerfully reminding them what it is just before you sit down is always a good idea.