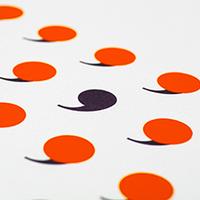 The purpose of punctuation

In 2003 Lynne Truss's book Eats, Shoots and Leaves caused a firestorm of interest in stopping the purported precipitous slide in standards of punctuation. There was one thing very right about the book, and two things very wrong.

What was right about it is that it became an international bestseller, making Ms. Truss quite a wealthy woman. What was wrong about it were its two principal theses.

WHAT SLIDE IN STANDARDS?

First, there has been no precipitous slide in standards of punctuation, or at least not one that anyone could really document. The older generation throughout history has always lamented the decline in the standards of something or other, be it literacy, respect, decorum, initiative, music, etc. because "it wasn't like that in my day."

The fact is, there are no true standards of punctuation in English (or in many other healthy, evolving languages), nor should there be. Punctuation is a tool. Its value resides in how well it is used to achieve its end, which is better communication.

I would argue proper punctuation has two essential objectives:

If these objectives are achieved, then punctuation serves its purpose, even if two people, or two countries, do it differently.

It would be too long and tedious to discuss all aspects of punctuation here, so let me enlarge on this argument with regard to the simple comma, whose "decline" seems to have so exercised Ms. Truss.

By simplest definition, the comma is a punctuation that allows the reader to take a momentary pause to absorb and assimilate what he has just read, or to prepare him for what he is about to read. In general, however, a sentence without commas aimed at this objective would be just as understandable as a sentence with commas. But would it be as effective?

Let's look at an example, in fact the one on which Ms. Truss based the title of her book Eats, Shoots and Leaves:

A panda walks into a café. He orders a sandwich, eats it, then draws a gun and proceeds to fire it at the other customers.

"Why?" asks the confused, surviving waiter amidst the carnage, as the panda makes towards the exit. The panda produces a badly punctuated wildlife manual and tosses it over his shoulder.

The waiter turns to the relevant entry in the manual and, sure enough, finds an explanation: "Panda. Large black-and-white bear-like mammal, native to China that eats shoots and leaves."

This, of course, is a pun, a play on words, as are many language-based jokes. However, in reality, if you hear a zoologist say a panda is a large, bear-like animal that eats shoots and leaves, it is highly unlikely that you would make such a bizarre interpretation. Why? Because to a large extent meaning depends on context. The same words or sentences in one situation may have entirely different meanings in another, depending on what precedes them.

For example, if you hear someone say, "I like dogs," your first thought would probably be that dogs are his or her favorite domestic animal. On the other hand, if it were preceded by the question, "What is your favorite food?" the same statement would have an entirely different meaning.

Because of context, it is highly unlikely (if not virtually impossible) that anyone would confuse the two meanings.

THE PAUSE THAT REFRESHES

Let's return to the idea of the comma being a pause and see how it could be used to enhance understanding by either avoiding confusion or creating emphasis. You have already seen several examples of it in this essay.

English punctuation may have changed, but change does not ipso facto equate with decline. By such an argument, American punctuation would have to be considered a debasement of British punctuation, from which it derives.

In both sentences, the commas could quite easily have been left out in order to read:

English punctuation may have changed but change does not ipso facto equate with decline. By such an argument American punctuation would have to be considered a debasement of British punctuation from which it derives.

The two paragraphs have exactly the same meaning, which no one would misinterpret. However I think you will agree that they don't have quite the same emphasis.

When I was a very young child and people asked me what I wanted to be when I grew up I said an insurance salesman which of course surprised them because it wasn't the answer they were expecting.

When I was a very young child and people asked me what I wanted to be when I grew up, I said an insurance salesman, which of course surprised them because it wasn't the answer they were expecting.

When I was a very young child and people asked me what I wanted to be when I grew up, I said an insurance salesman. This of course surprised them, because it wasn't the answer they were expecting.

Let me be perfectly clear. I am in no way advocating that punctuation should not be taught as part of any literate person's basic education. However I am in no way advocating that punctuation not be taught as "rules" cast in stone, because in most cases they are not rules at all. They are conventions, i.e. general but arbitrarily agreed ways of doing things. If they were truly rules, then Ms. Truss, who is British, would not have needed to create a separate American edition of her blockbuster book. The original version would have sufficed for any and all English speakers, anywhere in the world.

I personally lament the declining use of commas. I tend to use more commas than many younger writers. I also recognize that I probably overuse commas, but this is how I was taught. I have made a conscientious effort to reduce the number of commas in my texts; however not to follow the fashion. In certain instances I was taught to use commas obligatorily, even if they served no purpose. But if they serve no purpose, why use them?

I am now perfectly at ease about not using obligatory commas when there is no obvious need for them. However, I judiciously include them whenever I feel a pause or a bit of emphasis would be useful.

In other words, I am inconsistent. I sometimes use a comma after "thus," "therefore," etc., and other times I don't; however I consistently make this a conscious decision. I no longer automatically put commas in because this is how I was taught, any more than I automatically leave them out in order to be in tune with the trend.

I use commas (and all other forms of punctuation) to build the best possible text I can. One whose basic meaning is impeccably clear, together with any pauses and emphases to help the reader better understand and assimilate everything that the text is truly trying to say.

Isn't this what effective writing is all about?