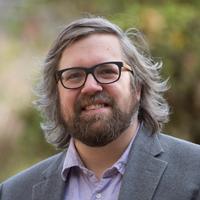 In this series of interviews with innovation leaders, Ubiquity Associate Editor and software engineer, Dr. Bushra Anjum sits down with Dr. Richard Skarbez, a lecturer in the Department of Computer Science and Information Technology at La Trobe University, to discuss augmented, mixed, or virtual realities and how users interact with such technologies.

Dr. Richard Skarbez is a lecturer in interactive visualization in the Department of Computer Science and Information Technology at La Trobe University in Melbourne, Australia. His goal is to enable the effective development, deployment, and use of immersive technologies such as those used for augmented, mixed, or virtual realities (AR/MR/VR, often collectively denoted "xR"). To that end, his research focuses on how users experience xR technologies. Specifically, how do users perceive and reason about information presented via xR? And, after being exposed to information in xR, how do they change their thoughts, feelings, or behaviors? Rick can be reached at [email protected] or via Twitter: @RickSkarbez.

Increasingly, people spend their time, money, and energy interacting with virtual and mediated environments using a combination of virtual, augmented, or mixed reality technologies, commonly called xR. These technologies themselves are not new; Ivan Sutherland famously demonstrated a working head-worn display and tracking system in 1968. What's changed in 50 years is that today's xR systems are cheaper, more widely available, and better than they ever have been.

These technologies have the potential to dramatically change the way people interact with computer systems and with the world around them. We could see increased access to medical care through virtual telemedicine, improved safety and effectiveness of emergency responders through virtual skills training, and a greater understanding of complex data through immersive visualization and analytics.

However, many issues need to be addressed if xR is going to live up to these hopes. Some of these issues are technological (display, rendering, tracking, software, networking, etc.); some are ethical, etc. But the questions I am most concerned with are related to the human experience itself, such as: How do humans perceive data presented in immersive environments? How does data presented in an immersive context affect human cognition, emotion, and behavior? And how "real" does a virtual environment need to be to be useful?

How did this concern emerge? Precisely, how did your background, education, community, and past professional projects shape it?

When I was five, I was fortunate to have some formative pieces of technology in my home, namely, the Apple IIGS and the original Nintendo Entertainment System. For better or worse, I didn't use these technologies to learn how to program or become a child computing prodigy. What I did learn, though, was that computer-generated stories and worlds could be extremely compelling, despite the technological limitations that existed at the time.

When I was 15, I was an avid reader. Two of the books that made a particular impression on me were Neal Stephenson's Snow Crash and William Gibson's Neuromancer. Both authors created compelling visions of shared virtual reality environments: Stephenson's Metaverse and Gibson's Matrix. I was especially enthralled by the vision of the Metaverse; users on devices of widely varying quality could all access the Metaverse. In that world, having a high-end terminal might get you fancier graphics, but everyone interacts with the same underlying data. I would revisit this idea with my Ph.D. thesis, in which I studied whether having a world that "makes sense" might be as important—or even more important—than a world that "looks real" [1].

At 25, I was a Ph.D. student at the University of North Carolina at Chapel Hill. I worked with the Effective Virtual Environments group and the people who would end up being my Ph.D. advisors, Mary Whitton and Fred Brooks. I learned, during my Ph.D., to have a focus on effectiveness. It's all well and good for the work to be exciting or cool, but the real measure of success is whether it is useful to real users with real problems. One area in which virtual reality has clear utility is training. But, if virtual reality training is to be effective, we have to learn how different aspects of virtual experiences affect their users. My dissertation and publications drawn from it have explored this topic [1]. One notable finding is that having a virtual body is much more important to users than, for example, realistic behavior of physical objects or characters.

My work today is shaped by these formative experiences. I continue to study why people find experiences in immersive environments compelling, or why they don't, so we can make the applications more useful.

What project or initiative are you currently leading that has the potential to address the issue presented in response to the first question?

I joined the Department of Computer Science and IT at La Trobe University in June of 2018. I have established the Immersive Interaction Design Lab (IIDL), along with Professor Henry Duh and other colleagues at LTU, to continue investigating how humans interact with data presented via immersive technologies. For the remainder of this section, I will focus on my research into presence.

Readers may have heard of "presence" in the context of virtual reality as the feeling of "being there" in the virtual space. Following Mel Slater [2], I prefer to call this feeling place illusion (PI), and distinguish it from plausibility illusion (Psi). Psi is the feeling that the events one is experiencing are really happening. For example, assume you are in a VE [virtual environment] intended to represent a library. Here, presence would be your feeling of, "I am in a real library." If you turned your head and saw more bookshelves, then that would reinforce your feeling of PI. If all the library patrons were quiet, then that would enhance your feeling of Psi.

PI has been extensively studied by the virtual reality research community. There is not a similar body of knowledge regarding Psi. This is partly due to recency. But I believe that this discrepancy is also because investigating plausibility illusion is just hard. PI seems to derive primarily from system characteristics: display field of view, system latency, and the like. These are quantifiable things. On the other hand, Psi derives from characteristics of the experience, such as the behavior of objects in the environment, users' expectations about the experience, and so on. To choose virtual fire-fighter training as an example, having a display with a wider field of view might increase a user's feeling of PI, while having the simulated fire behave appropriately might increase their feeling of Psi. If one experiences both PI and Psi, then one is more likely to respond to virtual stimuli as if they are real. And really, that's often the desired outcome when using virtual reality.

In addition to my research and my work at La Trobe, I have also been very busy helping to organize the ACM VRST symposium, which was held in Sydney last year. The 2020 symposium will be held in Ottawa, Canada, so if you're interested in xR research, consider taking a trip to Ottawa next November!

What about you? Are you excited about the future potential for xR? Do you have questions about the life of an early-career academic, or what it's like starting a new career in a new country? Would you want to share your inspirational touchstones for future technologies? Regardless, feel free to get in touch!