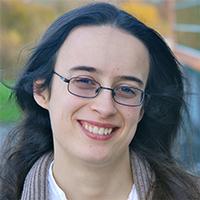 In this series of interviews with innovation leaders, Ubiquity Associate Editor and software engineer, Dr. Bushra Anjum sits down with Sarah Clinch, computer science researcher and lecturer at the University of Manchester, to discuss the cognitive burden technology innovations create.

Dr. Sarah Clinch is a computer science researcher and lecturer (assistant professor) at the University of Manchester, U.K., where she is a founding member of the School of Computer Science's new Ubiquitous Computing research theme. She has a Ph.D. from Lancaster University. She sits on the editorial board of IEEE Pervasive Computing, Proceedings of the ACM on Interactive, Mobile, Wearable and Ubiquitous Technologies (PACM IMWUT), and is an inaugural member of the ACM Future of Computing Academy.

Clinch is internationally recognized for her research in pervasive display technologies, with papers on the topic published at esteemed venues like Mobisys, Ubicomp, and CHI. Her open-source research software is in daily use as part of the world's largest research testbed for open displays. Clinch has recently begun to explore the effects of technology on human cognition and mental health, with a particular interest in memory and forgetting. She can be reached via email [email protected] and Twitter @5aff.

As technology seamlessly integrates itself into our everyday lives, it's silently changing the way we think. Smartphones and similar technologies are already accused of "making us stupid" [1]. There is, understandably, growing interest in using technology to augment human capabilities, both to address the specific impairment and to simply extend or enhance our senses and natural abilities. While I'm excited about these research directions, I'm keen for researchers and innovators to consider the potential for these technologies to actually reduce our inherent cognitive abilities.

The internet, social networks, smartphones, wearables, and other technologies are providing us with easy-access information, new communication channels, audio and photographic records of our experiences, and completely new sensory inputs. Less visible, however, is the possible negative impact of these technologies on the very cognitive processes they are intended to augment. The ubiquity of the smartphone has led researchers, particularly in psychology, to begin exploring its impact on our attention and cognition and it has been suggested that even when turned off, our mobiles continue to consume our attention and cognitive resources [1]. Likewise, the impact of search engines, internet knowledge banks, and social media have become targets for research, revealing the so-called "Google Effect" [2] in which individuals reduce cognitive effort, and retain less in circumstances where a computer can store information for them. Headlines such as "Is Google Making Us Stupid?" capture attention, but most likely miss the significance and subtleties of the likely impact. Technology will undoubtedly relieve us of some cognitive burden (for better or worse), but research demonstrates that it has the potential to actively distort our thinking without any awareness on our part: distorting our identities, beliefs, and memories [3] and directing our decision-making [4]. Understanding these side effects, and their implications for future technology innovation is a problem that really excites me.

What sparked your interest in the psychological and technological aspects of human cognition?

My father is a computer scientist, and my stepfather a (now retired) hospital doctor. My stepfather passed down his old psychology books when I was a teenager. I was fascinated. I soon developed a plan to study psychology at university. However, plans and paths don't always run smoothly, and I found myself enrolling in a combined science course with psychology and computer science as joint majors. Three years later, I graduated with a degree in computer science, but my love for psychology had never gone far and has remained highly influential in my career and research choices.

In my Ph.D. I studied public display infrastructure (such as digital information boards and advertising screens) to deliver personalized content for individuals. A common question for this research centered on the use case for personalized content shown on public displays, especially given a world with near-ubiquitous personal mobile screens (smartphones, watches, head mounted displays). However, I firmly believed (and still do) that public and personal screens are both parts of an ecosystem of devices that work together to support our everyday activities.

Towards the end of my Ph.D., I had the good fortunate to be included in an EU-funded project exploring how a combination of public and personal technologies might form an integrated platform to augment human memory. At the end of that project, my former Ph.D. supervisor (together with colleagues from Edinburgh and Essex) and I applied for U.K. funding to consider how technologies for memory augmentation might generate unique privacy and security flaws. For example, considering how technologies for reviewing your experiences could be used to generate false memories (e.g., by leveraging the doctored evidence effect [5]) or deliberately attenuate target memories (e.g., through retrieval-induced forgetting [3]). This proposal was funded by the U.K's Engineering and Physical Sciences Research Council (EPSRC) in 2016.

What initiatives are you currently leading to anticipate and study the negative effects of technology on human cognition?

Our U.K. EPSRC-funded project PACTMAN has another year to go. In this project we are conducting pioneering interdisciplinary research to create the world's first comprehensive system for privacy and consent management in future pervasive environments, i.e. environments with a wide range of sensing capabilities. Our work is informed by two scenarios: human memory augmentation and personalized information presentation. To date, the project has largely focused on traditional trust and privacy concerns for augmented cognition systems (keeping data safe, understanding how it might be used, etc.). Over the next year, my team at Manchester will conduct studies exploring the cognitive risks associated with revisiting personal data for the purpose of augmenting human memory. For example, do distortions of visual life-logging summaries lead to similar distortions in our memory for the experiences we thought those summaries represented? If so, what safeguards will future memory augmentation systems need to put into place to prevent intentional (or unintentional) manipulation of our cognition?

Beyond the context of the EPSRC-funded PACTMAN project, my team is exploring a variety of other aspects pertaining to how technologies might be used to enhance cognition and experiences, as well as the risks that such technologies bring for memory, attention, and mental health. Together, I hope that we'll build a portfolio of research that helps us understand the challenges of developing systems in the context of cognition and approaches for technologies that reduce negative impacts. Hence, I'm pleased to be contributing a chapter exploring these ideas to a forthcoming Springer volume on human augmentation. I'm keen to engage researchers around this problem and would love to hear from anyone interested in discussing or collaborating in this area.

[4] Caraban, A. et al. 23 ways to nudge: A review of technology-mediated nudging in human-computer interaction. In Proceedings of the 2019 CHI Conference on Human Factors in Computing Systems. ACM, 2019.