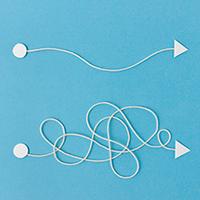 Ubiquity and your future
(from the editor)

A perspective on how Ubiquity prepares readers to navigate and shape the future rather than forecasting the future.

Ubiquity is an ACM online magazine devoted to the future of computing and the people who are creating it. The name celebrates the pervasive presence of computing throughout our world and our lives.

Ubiquity is free and open to anyone. All articles published in Ubiquity are reviewed, and are edited for clarity and conciseness. Ubiquity has grown in popularity over the years. Some of our recent articles have been downloaded 40,000 times and several older articles 500,000 times.

Ubiquity's mission—to explore the future of computing and the people who are creating it—is open to many interpretations. Our authors often ask who are they writing for, and readers ask how we carry out our mission through our articles. Do our editors have some special access to what is going to happen in the future? How do we know which professionals among us are creating technologies that will eventually affect all of us?

We Do Not Predict

In 2011, Ubiquity editor Brian Branagan interviewed me about "the future" and how we approach it in Ubiquity. Please read that for more detail about our philosophy.

Peter Drucker, who was famed for his ability to see things about the future that most others missed, was often asked about how he made his forecasts. He quickly responded he never tried to predict the future because it is fundamentally unpredictable. He said his primary practice was to point out current "realities" and show what their consequences are in the immediate future. He had a knack for noticing realities that most people had missed. When he explained them to his audiences, they were often astonished even as they nodded in agreement. He was a master at revealing the obvious that isn't obvious until someone says it. When the immediate future is the consequence of the obvious present, it becomes pretty obvious what is likely to happen in the immediate future.

When pressed for his insights into longer term futures, Drucker said he went with historical probabilities. What has happened in the past that is similar to today's circumstances, or circumstances likely to appear in the near future? If there is a pattern, Drucker would point it out and say it could happen again. He was pretty good at this too.

Drucker was not interested in predicting the future, but in giving his listeners a sense that they could successfully cope with the future that would soon emerge. This is what the editors of Ubiquity and I are aiming for.

Putting the Ideals to Practice

How do we put these ideals to practice in our editorial work?

Our primary practice is to pick on emerging technologies that are attracting interest. Emerging technologies are a key focus for us because they will shape the immediate future. We examine not only how the technology works and what forces are pushing its emergence, but how people, communities, and institutions are reacting to it. We seek authors who can give a tutorial on how the technology works and speculate about ways that make it useful in practice. We have found that interviewing people who are developing the new technology is particularly productive for this.

Let me cite some recent examples. Walter Tichy interviewed Catherine McGeogh on quantum computing; she showed us why computer scientists are not prepared to program quantum computers. Tichy also interviewed John Gustafson on the dangers of finite number representations in critical computing applications; he showed us two new number representation systems, which are more compact and less error-prone than existing floating point standards. And Tichy interviewed students who were concerned about fake automobile emissions tests; they developed new methods using big data analytics for road-testing emissions. I interviewed Jeff Buzen, who offered a new perspective on probabilities and randomness that has been developed in the computing age.

But we go further than this, I would like to add that at Ubiquity we aim to help prepare our readers for the future that will show up; to help them be good navigators through the fog of uncertainty that often accompanies emerging technologies. Our monthly "Communication Corner" columns by Phil Yaffe is an example of this—effective communications are essential for navigators.

Yaffe's recent blogs on "Extraordinary Ordinary Things" examine technologies that are so common and embedded into our everyday lives that we do not even notice them. We easily miss the extraordinary reality that our world would collapse without them. He brings forth their history and how computers have affected them. His stories show graphically how innovations gain their emergent momentum from historical forces in their communities, but also how successful innovations become so embodied and normal that no one notices them anymore. We can often do a better job of anticipating how emerging technologies shape the immediate future if we understand the historical forces behind them.

Those who want to apply Drucker's wisdom about predicting longer term probabilities will find Yaffe's approach particularly valuable. With a little research, you can write your own stories about emerging technologies that produce new possibilities for innovation.

Andrew Odlyzko's essay on cybersecurity examines a reality and anomaly in cybersecurity. How is it that despite the dire predictions of imminent, catastrophic cyberattacks, no "Cyber Pearl Harbor" has happened? This essay illustrates a desire on our part to publish contrarian views. Even if you don't agree with a contrarian view, it can stimulate your thinking and give you new insights into the forces at work in the world.

Ubiquity has experimented with different formats and models to see if there are new approaches that help us achieve the goals above. One of our most successful is the Ubiquity symposium, a compendium of views on a particular proposition by half a dozen to a dozen different authors. We have published symposia on the nature of computation, evolutionary computation, the science in computing, the multicore transformation, MOOCs, the singularity, the Internet of Things, and big data. Another on complex systems is in the works.

Another successful feature has been our interviews of young professionals, under the guidance of editor Bushra Anjum. Ubiquity has always believed the future is being created by our youngest professionals who will go on to be its main inhabitants. We partnered with the Future of Computing Academy (FCA), an ACM group of young professionals advising ACM on future programs. Anjum set up a series of interviews with FCA members so that they could say what their big concerns are and how they are realizing their ambitions to deal with them. These interviews give a good perspective on the kinds of issues of most concern to this generation. We are now expanding to include all young professionals. If you are a young professional and would like the exposure this forum can give you, please contact her.

Not all our experiments have worked. A few years ago we intensely pursued a proposal for video publication. We created an option for authors to submit videos instead of (or in addition to) written articles. We created a review panel of young professionals to review video submissions, help recruit new ones, and give us general advice on how to appeal to young professionals. This did not work out. No one ever submitted a video. Our panel dissolved because they had nothing to do. We concluded although people like videos, they prefer professionally produced and edited videos—and that makes them expensive. ACM did not want to invest money in this without a clear indication of interest. We abandoned this experiment. (We will still consider video content from authors who wish to submit it.)

Finally, the Ubiquity editors believe in building better bridges between the research and practitioner communities. This is a two-way street. The research-practice direction is best served in our current model by interviewing the professionals doing the research, discussing how it works, and exploring its consequences. The practice-research direction is one we are seeking to do better by interviewing practicing professionals to find out what they are doing and what issues might be good subjects of research.

We are no better than you at predicting the future. Rather, our job is to help you be better prepared for the future that shows up. We do this by finding authors who can explain emerging technologies and show how they might be used. When an emerging technology is complex and fraught with issues, we commission a symposium to look from multiple perspectives. We also dig into the history of certain technologies that are so ingrained that we hardly notice them, with the aim to help our readers see patterns that will also shape the future. And finally, we help our readers with practical guidelines on improving their own abilities to write and communicate clearly and concisely. You, our readers, will shape the future. We celebrate you!

Links to Ubiquity articles mentioned above.

Peter J. Denning is Distinguished Professor of Computer Science and Director of the Cebrowski Institute for information innovation at the Naval Postgraduate School in Monterey, CA, is Editor-in-Chief of ACM Ubiquity, and is a past president of ACM. The author's views expressed here are not necessarily those of his employer or the U.S. federal government.