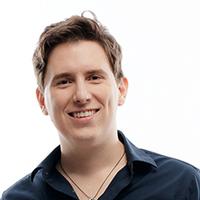 In this series of interviews with innovation leaders, Ubiquity Associate Editor and software engineer, Dr. Bushra Anjum, sits down with Dr. Santiago Montesdeoca to discuss the evolution of the animation industry as well as the aesthetic constraints creatives face when reconciling their personal artistry with commerce and trends.

Dr. Santiago Montesdeoca is a hybrid artist/engineer/researcher with a unique interest and expertise in non-photorealistic and expressive rendering methodologies. His recent Ph.D. research has led him to publish award-winning papers in the field and to present his work at SIGGRAPH's Real-Time Live! and Pixar Animation Studios. Currently, he is starting his own company, Artineering, dedicated to empowering artists to express themselves in any style using 3-D computer animation. Before that, he co-founded studio.coop, was a Lucasfilm Jedi, and even a temporary banana farm manager in his home country of Ecuador. He can be reached via email at [email protected] and on Twitter @notpainted.

Since the emergence of 3-D computer graphics, scientists and engineers have successfully led various breakthroughs in the field. These breakthroughs have evolved the field from visualizing sparse data points in virtual space to recreating entire worlds and physical phenomena with static/animated/simulated points, curves, surfaces, materials, and lighting. In entertainment—more specifically, computer animation—enormous leaps have been made advancing algorithms and hardware. Since the seminal work of Catmull and Parke in 1972, which presented the first polygonal animated hand, the technology has matured to the point where it is commonplace for professional VFX (visual effects) to remain unnoticeable from real filmed footage, for virtual and augmented reality experiences in our mobile phones, and for fully 3-D animated feature films to become mainstream.

However, as 3-D animation becomes mainstream and the supporting software streamlines the artist's workflow, artists are presented with a creative bottleneck. Experimentation and creativity go hand in hand, but it becomes increasingly difficult for artists to produce visuals outside of the programmed aesthetic, limiting their individual expressions. The creative bottleneck is evident when comparing animated films released in recent years.

While there are undoubtedly other factors involved in the similarity and streamlined look of animated productions—e.g., producers not risking doing something different than the tried and tested methods—since its inception, 3-D computer graphics have been on a quest towards photorealism [1, 2]. Photorealism, based on physical phenomena, happens to be a natural and comfortable direction to aim towards, for technical people. However, artists do not necessarily express themselves in realistic ways. In fact, they prefer to express themselves in individual stylized ways that reflect who they are and what they want to communicate. Just imagine Claude Monet, Pablo Picasso, or even Banksy forced to paint realistically throughout their life. They would probably have not become the influential artists they represent today.

Photorealistic 3-D computer graphics opened entirely new ways of expression and storytelling for artists and has motivated the development of powerful tools to create intricate worlds in 3-D. However, it is also hindering the artist's full potential within the 3-D medium, by forcing them into a predefined aesthetic, which they can't easily modify.

How and when did you first become aware of the creative restrictions that 3-D computer animations are silently imposing on the artistic community?

This concern emerged from my personal experience as a 3-D artist.

During my teenage years, the short film "The ChubbChubbs!" was a turning point that opened my eyes to the possibilities of the 3-D medium. The idea of creating entire worlds from my computer and having only my imagination as a limit to my undertaking captivated me. This growing interest led me to attend a higher education graphics institute in Ecuador at night for two semesters while I was 16, to learn the basics.

However, it was not until my bachelor's degree in audiovisual media at the Stuttgart Media University in Germany, where I hit the creative bottleneck. We had a semester project that involved creating a 3-D animated short film collaboratively within a small team. We wanted to do something visually different than all other short films available out there, so we considered a painterly and more abstracted graphic style. By doing so, we would be able to focus more on storytelling within our own expression, rather than dealing with the physicality of the real world acquired through a photorealistic depiction. Unfortunately, we found no tools or software that would allow us to produce the vision we had in mind. All options were reduced to a few research papers, which did not fully represent the style we were aiming for and would take too long to implement. This was extremely frustrating for us and this creative restriction ingrained itself within me.

I later specialized further in digital animation at the Nanyang Technological University in Singapore as an exchange student, to later join the Jedi Academy at Lucasfilm to work on "Strange Magic." While working in production was extremely exciting and fun (I even worked with people who did "The ChubbChubbs!"), I wanted to further my education, and the possibility to work for four years as a Ph.D. student in a topic of my choice materialized. I had to do something about my creative bottleneck using 3-D computer animation.

What initiatives are you currently leading that may empower the artistic community to express their creativity fully using digital technology?

I dedicated the four years of my Ph.D. at the Nanyang Technological University in Singapore to research and develop the tools that I always wished to have as an artist. It was a bit crazy and certainly not an easy transition. While I might be a competent programmer, I had not studied computer science and had never done anything serious with my code apart from some animation and workflow tools for production.

Nonetheless, I introduced the concept of direct stylization pipelines and developed a real-time watercolor style for 3-D computer animation, which could be art-directed at multiple levels of control—from global presets to brushes. The approach and its results were unprecedented and well received within the research community and artists alike. Since then, I've also extrapolated the technology to other styles and the compiled work of my research has finally been open-sourced as MNPR, a framework for expressive rendering within the widely used 3-D application (Autodesk Maya). Developing on top of an existing software brought special considerations and limitations which aggregated some frustration and probably more development time overall. However, this allowed my contribution to reach as many artists as possible, who could test and drive my work further.

While conducting my research, I have also been involved in the Expressive Symposium organization to help promote and refresh this specialized conference. I see a growing interest in the field, which motivates my work further.

Now, I am continuing my work within expressive non-photorealistic rendering, working closely with animation studios and passion projects to develop and deliver customized stylized rendering solutions. I have also started a company to take what I have learned to the next level and develop an artist-friendly framework to customize and art-direct styles within any 3-D application fully. I believe that, as researchers and engineers, in the same way, that scientists concocted new colors and artisans crafted new tools for painters to enable their individual visions, we need to develop these for 3-D artists, as well. No pre-programmed style or pre-trained neural network will be able to satisfy and match every artist's unique vision.

If you are a developer or researcher in the field, I encourage you to invite artists and have them guide your development process. If you are an artist, make your voice and expression be heard, and look out for new technologies that might enable them. If you are interested in creating or steering the next generation of art-directed stylized computer graphics, let us get in touch and create the software that we have always wanted to use.