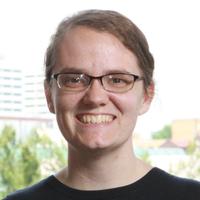 An interview with Katie Schuman
on the future of neuromorphic computing

Innovation Leaders: An interview with Katie Schuman: on the future of neuromorphic computing
Bushra Anjum
DOI: 10.1145/3322097

In this series of interviews with innovation leaders, Ubiquity Associate Editor and software engineer, Dr. Bushra Anjum, sits down with Katie Schuman to discuss computers inspired by biological neural systems as an alternate promising architecture.

Bushra Anjum (BA): What is your big concern about the future of computing to which you are dedicating yourself?

Katie Schuman (KS): My biggest concern with the future of computing is how the computing community will deal with the looming end of Moore's Law and the end of Dennard scaling. Moore's law said that the number of transistors on a chip doubles roughly every two years, and what the concept of Moore's law gave us is increased speeds in computing from year to year, due to improvements in hardware. Dennard scaling is a scaling law, which was tied to Moore's law and said that the amount of power consumed by a computer chip was a consequence of the size of the chip rather than the number of transistors. Moore's law depended on Dennard scaling, and because Dennard scaling effectively ended around 2006, it has affected the computing performance improvements that we see today. That is, we do not see the types of increases in computation speed that we enjoyed under the reign of Moore's law and Dennard scaling. To deal with this, today's computer architects are looking to different architectures that specialize in specific application workloads to allow for continued improvements to computing speed, but the incorporation of new computer architectures and technologies is not easy.

Bringing neuromorphic systems into production will require tremendous investment [1]. One of the biggest challenges is the development of new programming models and languages for these machines. The computational thinking we have learned is based on the von Neumann architecture, which features programs stepping through instruction sequences, and transferring data between computational units and memory. Neuromorphic computing requires a different kind of thinking that does not rely on instruction sequences and instead relies on training or learning processes for programming the system. Neuromorphic systems also need new methods for measuring and assessing performance. The increased performance of neuromorphic computers comes at the cost of specialization; they are not meant to be general-purpose computers [2]. However, there is recent work, including some by my colleagues and I, suggesting that these computers can be usefully applied to problems other than machine learning [3].

Why has it taken so long for these non-neural network use cases to emerge? I believe that it is because a new, unfamiliar kind of computational thinking is required to program these systems. Adoption of these new technologies will require a paradigm shift in how we think about computing as a whole, and paradigm shifts are often uncomfortable and challenging. Though this is a difficult task, continued innovation in computing depends on our willingness to move beyond our traditional von Neumann systems.

BA: How did you become interested in computers, and how did that interest lead to the field of neuromorphic computing?

KS: My dad was a middle school math teacher with an interest in computing and electrical engineering. Every few years, he would get the latest computer for our family so that he could keep up with and utilize computing in the classroom, so I don't remember a time in my life where my house didn't have a computer. I got to use the computers, too! My parents invested in educational games for me. Over time, I was able to track the progression of computing technology as I could see how the games I was playing became more complex and sophisticated over time; I could even see how the same game's performance would differ because of a newer, faster computer.

Though computer science courses weren't readily available during my secondary education, I loved other STEM topics: math, biology, and chemistry. When it was time to choose a major in college, computer science was an obvious choice for me. In my later years of undergraduate and graduate studies, studying machine learning (in particular neural networks and genetic algorithms) allowed me to combine my excitement for computing with my love of math and biology—particularly neuroscience and genomics. This combination led me to my dissertation work where I developed a simplified spiking neural network model. A spiking neural network is a neural network model that takes even more inspiration from the biological brain than the traditional model. There is an explicit notion of time in spiking neural networks; that is, when a neuron fires in spiking neural networks, it can take varying amounts of time for the output signal to travel along synapses to reach other neurons. During my dissertation, I demonstrated that the algorithm and model that I had developed could be applied to classification, control, and anomaly detection problems successfully.

As I had grown up watching computers advance in performance, it was easier for me to notice that there had been a plateauing of the performance improvements in new computers [1]. I was introduced to the field of neuromorphic computing by Mark Dean, a professor at the University of Tennessee, during my graduate studies. Dr. Dean, along with my advisor Dr. Doug Birdwell, had recognized the consequences of the looming end of Moore's law and Dennard scaling, and [they] were interested in pursuing the development of new computer architectures and hardware. Together, we developed a computer architecture and hardware system based on my simplified spiking neural network model, which became our first foray into neuromorphic systems.

As I learned more about the field of neuromorphic computing, I realized that it is dominated by hardware developers, neuroscientists, and machine learning researchers, but not many software developers and engineers. We do not have enough computer scientists working towards developing the appropriate system software and applications for these types of systems. There is a need for the development of general-purpose software tools for new architectures such as neuromorphic computers to become usable by the computing community at large. Just like the widespread use of GPUs was enabled by the development of software libraries and APIs, new architectures like neuromorphic computers will need its own set of software systems, APIs, and so on, to make them accessible to new users.

BA: What efforts are you currently leading to make the world of neuromorphic computing more appealing to the computing community as a whole and more inviting to newcomers?

KS: I am currently co-leading a research effort between Oak Ridge National Laboratory and the University of Tennessee to develop common algorithms and system software tools for neuromorphic systems. We work closely with materials scientists and device engineers to learn how to use new neuromorphic implementations effectively. We also collaborate with applications developers on building new neuromorphic software implementations, with a focus on ease of use from the application development perspective. The project is primarily centered on using existing and developing new machine learning techniques to build the "programs" for neuromorphic systems automatically. As part of this project, we have developed the TENNLab software framework, which is a common application programming interface for spiking neuromorphic computing systems [4], as well as EONS, a software system that uses genetic algorithms to assemble spiking neural networks for particular applications [5]. Both of these frameworks are meant to ease the use of neuromorphic computing systems for new users. Our team is also working on developing non-machine learning algorithms and applications for neuromorphic systems. In this case, instead of treating it as a neural network accelerator, we approach the neuromorphic architecture as a computer architecture with specific characteristics, such as massively parallel computation, simple computational units, collocated processing, and memory, etc. that we then exploit to perform certain computations [6].

I hope that my work will make it easier to use neuromorphic computers, especially for researchers who aren't yet familiar with the field. I believe that the next big leap in computer performance and algorithmic development will come from new architectures such as neuromorphic computers, and my goal is to help enable those innovations to occur. We always welcome collaborations. If you are interested in investigating the use of neuromorphic computers for your applications or in integrating an existing neuromorphic hardware system into our software infrastructure, please do contact me for more information.