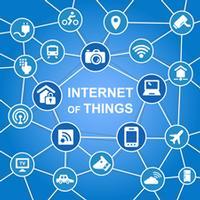 The Third Wave: The internet of things
The Internet of Things (Ubiquity symposium)

We are witnessing these days the rise of always-on, connected devices, systems and environments. This might well represent the basis for the emerging digital economy. This symposium brings in diverse points of views trying to synthesize the most likely future of Internet of Things (IoT).

The Internet, as a resilient network-of-networks, was standardized in the 1980s with TCP/IP protocol [1] enabling fundamental network device communication. That was followed in the '90s with CERN-born HTML/HTTP formatting language and protocol [2], leading to the explosive use of the web. Recent advances in hardware, software, and communication technologies have enabled a major shift to mobile web consumers amounting to several billion individuals today. The next possible shift is to "The Internet of Things" (IoT) described as a huge system consisting of 30 to 70 billion devices, connected to trillions of sensors and actuators, being always online, everywhere and anywhere. Depending on the imagination and/or commercial interest, new markets of trillions of dollars are being envisaged, and wide publicity and attention given.

In the 1990s the concept of ubiquitous computing was announced [3], which in hindsight looks very much like the IoT is described today. Several technological advances, profound social changes, and mature markets have created fertile ground for the new global cycle of changes.

Before we continue, I would like to share an email conversation I had last year with ACM's former president Vint Cerf:

Kemal: Vint, 40 years ago you have put the founding stone for the technology, which evolved over the last two decades into contemporary web. Now, by several indications, we might be approaching the third wave of technological advances seen as The Internet of Things (IoT). Do you see it really as an historical third wave?

Vint: IOT is indeed a third wave. The second was the arrival of the smart phone, making the Internet and WWW all the more useful. This network of devices will have a pervasive effect leading to smart homes, offices, cars and cities. [Mail - Wed 4/9/2014 5:51]

Today we are witnessing a converging momentum of interest in this domain [see Figure 1], in which the established consumer sphere will likely evolve to gadgets, wearable devices, and mobile hubs. The classic field of industrial control and SCADA systems will likely shift to new types of sensory networks and systems, and will be more and more accessible from the consumer sphere. It will likely spill over into the broad fields of home-automation and robotics, transforming the entire industry into energy-efficient fabrics. Thus, thinking of the first wave of Internet being network-minded, the second spreading into the social and consumer space, we could call the third wave "the fabric" or global weaving. It embodies global, omnipresent, always online, resilient critical infrastructure on which humanity will inevitably depend.

This symposium gathers participants from the major industrial players, newly born digital companies, academic circles, and regulatory bodies, aiming to bring clarity to possible future paths. Beyond outlining a bright future from the different viewpoints and perspectives, the symposium will also identify the major obstacles and big challenges that may render IoT difficult to materialize or even impossible. In particular, discussion will focus on tipping points—or particular events or circumstances leading to the third wave of the Internet. In conclusion, according to optimistic scenario, this new fabric may trigger some new industries, create new services, and enable economic growth and advances just as we have witnessed with the previous two waves. We are living in interesting times.

Kemal A. Delic is an associate editor for Ubiquity Magazine. He is also a senior technologist with Hewlett-Packard Co. He serves as an adjunct professor at PMF University in Grenoble, advisor to the European Commission FET 2007–2013 Programme, and expert evaluator for Horizon 2020. He can be found on Twitter @OneDelic.

2015 Copyright held by the Owner/Author. Publication rights licensed to ACM.

The Digital Library is published by the Association for Computing Machinery. Copyright © 2015 ACM, Inc.